Over in the Guardian, Ben Walters has written a smart and pithy summary of Forest Fringe’s activities over the past few years, and the pivotal role it (and DIY approaches to theatre in general) play nowadays in this perennial age of austerity (which shows little sign of letting up). 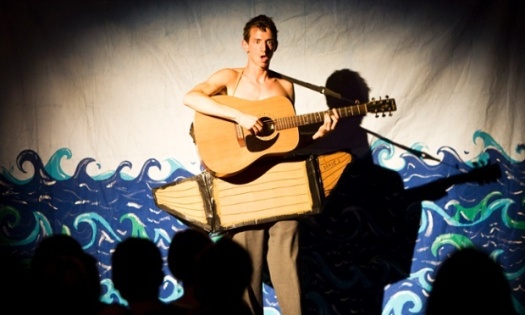 I’ve only visited the Fringe once before, back in 2011, and I was directed to Forest Fringe by Kings Of England. I remember being spellbound by Made In China’s We Hope That You’re Happy (Why Would We Lie?) in the building’s cavernous upstairs space. Action Hero were on the box office, having performed their thrilling Watch Me Fall the night before at The Summerhall Gallery. The cafe was alive with chatter and the hiss of hot drinks being made. Ever since then, Forest Fringe, and the artists associated with it, have been a byword for innovative, resourceful, contemporary theatre.

I entered the world of performance through the ‘back door’ of cabaret back in 2008, and any associations that phrase may with deviancy and illegitimacy are totally intentional. I didn’t have a qualification in performance – but I did have a strange sense of humour, and a willingness to get on stage to share my odd creations. Cabaret was the perfect arena for a nobody like me to launch himself on an unsuspecting audience. With little in the way of budget, things had to happen on a shoestring. I see DIY as a big part of cabaret’s DNA (except perhaps for when Hollywood movie stars get involved). Many of the performers I love and adore are working on next to nothing in terms of resources, and from there springs innovation and ingenuity.

The article quotes, ‘For Field, DIY is “an ideology rather than an aesthetic. It’s not defined by handmade props or deliberately shonky effects, though it sometimes is those things. It’s about finding alternative modes of production, ways of making art that invite us to imagine and inhabit different, hopefully better, ways of living in the world.”’

As an emerging practitioner, I don’t get the luxury of being trusted with big budgets, teams and stages on a regular basis.  Myself and everyone else wading through the ‘early-career’ phase of being a performance maker has to find their Philosopher’s Stone: turning base metals – or more commonly, cardboard, glue and glitter – into gold. For me, the real luxury would be to have both DIY and ‘professional’ approaches at my disposal. I love an expensive spectacle as much as the next person. Akram Khan’s Desh features an astounding finale in a mammoth production that only huge teams could have made happen. Big budgets can blow minds – but so can ‘no budgets’. Watching something ‘shonky’ transform into more than the sum of its parts is thrilling. Take this video for example: it takes just three minutes, an OHP and a pair of hands to delight an audience.

It’s the emphasis on DIY being an ideology rather than an aesthetic that really resonates with me at the moment. There are regular call-outs to perform at regional and national platforms, and I and all the other emerging artists are competing for those same platforms, treating them as the next rung on a very long, steep and slippery ladder. That effort’s only going to pay off for a lucky few, so what about the rest of us?

I’m not knocking platforms; they provide a huge amount in the way of support and promotion, and I’ve also been selected for my fair share in the past, so can hardly have a go. But let’s face it – application forms are a right chore, and every minute spent filling one out is one not spent making art. So I’m wondering how I can create opportunities for myself and others to share their work without compromising the ideas, rather than participate in what seems to be the arts equivalent of Black Friday stampedes every couple of weeks.

In the spirit of generosity and DIY, if I do find that Philosopher’s Stone, I’ll share the formula.