This was going to be a scream-of-conciousness post justifying the existence of ‘sex abjects’, a throwaway pun I came up with a couple of weeks ago. It was going to talk about performances that could be described as pornographic, or contained sexual content that might be considered abject and debased by Torycore moral crusaders, but in a completely uninhibted, unedited way. But I couldn’t help myself: I edited.

(Un)lucky you. You’ll just have to imagine the free-flowing and unfettered version spilling like the blood in Sebastiane by Ron Athey, staged at The Coronet Theatre this April. The semi-naked, body-modified-to-his-eyeballs, HIV-positive Athey arrives in Leigh Bowery cape, is tied to a stake and then skewered with luminous arrows as he hurls glossolalia over an audience pitched somewhere between religious congregation and concern audience. I stand and breathe and shiver as the heavy metal bass drum-pummel kicks up the camp theatricality and his attendants untie the wounded body, carrying it to the foot of the stairs where they tear up scraps of his blood-stained raiments. Each shred is packed into a little see-thru ball, and a phalanx of outstretched hands bends towards the stage like blades of grass in the wind. 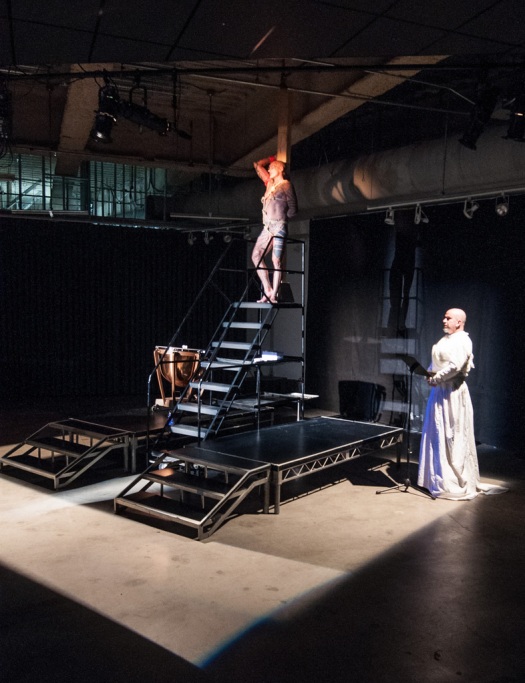 Meanwhile, Pieter Ampe in So You Can Feel is naked and slathered in white paint, also spilling freely like Athey’s blood over a stage / page. Ampe is like some kind of animated dessert, flicking cream from his flaccid penis into the wings of Contact. The woman in the audience in front of me is recoiling in slow motion from the unpredictable organ and a dry cleaning bill but I’m transfixed. There’s something so joyous and stupid about it: a simultaneous celebration of feeling and excess whilst acknowledging the risks of being smothered by them. As Ampe’s stands and screams to a classical score, wallpaper white, I’m taken back to my teenage void, my attempts at self-erasure in a bid to escape from my own queer sexuality and abnormal body.

So you can feel – Pieter Ampe / CAMPO – Belgische première from CAMPO on Vimeo.

And Lucy McCormick rocks a Jesus H. Christ goatee in Calendar Girl, whilst trampling over sacred cows in her re-enactment of Biblical stories through a murky, queer, feminist lens. It’s raw and roars, lurching from euphoric highs via anthemic pop to startlingly bare, untheatrical expositions on the story, as if she’s feeling her way slowly through the dark. It takes you up to impossible heights and drops you down again, and again, and again. It’s sits on your face and eats a cheese sandwich to Evanescence’s Bring Me To Life, in place of Jesus’ actual last supper (the one Jesus had after the mostly ceremonial one about chocolate eggs). As Joy Martin writes in Exuent:

“(It’s) a fascinating way to ironically depict Christianity’s relationship to, and devaluing  of, older goddess-based religions. It was a hilarious, shocking and profound show, which is what I have come to expect from Lucy McCormick.”

Lucy McCormick in Calendar Girl; photo: not sure…

When looking back over the past few months, these were the performances that stuck in my mind most, sharing threads of excess, debasement, euphoria and, to a lesser extent, desolation. They also place an emphasis on the sexual body: its role as a site of pain, pleasure, and those myriad sensations in-between. They’ve made me reflect on my body: what’s in and outside of it; what I do with it; what I let other people do with it.

They also made me feel like I could do so much more with my body, and wonder why I – why we – don’t.

It’s not about titilation. When I tell you I’ve seen an apple slice disappear up a woman’s vagina, or a nude man swivel around on his butt in a pool of white paint, or another man lie on a rack with a baseball bat up his rectum, I do it with enthusiasm because I’ve seen something that reaches a physical limit of its own choosing rather than one imposed by censorious opinion. When you’ve spent a significant portion of your adolescence trying to deny your own fantasies and physical realities as I have, it becomes more vital to witness other people exploring those limits.

They transgress the boundaries of polite society, but their purpose goes way beyond merely arousing and / or outraging their auidence, or plumming the depths of depravity (I hate even suggesting this might be a reason but, you know…). They accept the physical experience in all its dirt and glory, and push at the boundaries of what we can do and feel, in a way that makes me feel alive.