I’m wading through the commuter crowd gushing in and out of Manchester Piccadilly train station because I have a middle-class craving for sushi. I don’t yet know that some fucker has codged the light and bicycle pump from my bike by Canal Street, and that I will feel like a pillock for not expecting it. I don’t know that I’m looking for a sign either, but it turns out thagt I am. It comes in the form of a East Asian man leaving the station with an expression of wonder on his squinting, blinking face. He’s wearing that lazy smart-casual ‘go to’ of blazer and jeans + optional airplane bag. But the sign is there: on his face and on his t-shirt, which bears the slogan “NEVER GIVE UP”.

I didn’t know I was thinking of giving up, but in some small, pernicious corner at the back of my mind, maybe I was. And now I won’t. Becuase that guy – whoever he was – isn’t going to give up. He’s nailed his colours to the mast. He’s got a t-shirt and a face that says, “Come at me, bro: I am ready to absorb everything you throw at me. And whatever you do, I will still say, ‘It’s all cool’.” 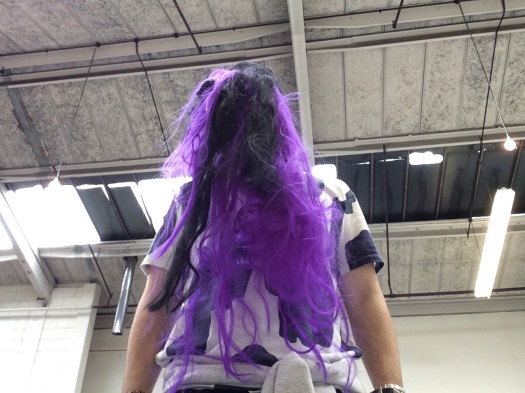